Transforming a car into a hybrid, with the addition of the option of solar charging, is the goal of the LIFE- SAVE project and the mission of eProInn. Since last September, a law approved by the Italian Parliament has removed one of the main obstacles towards the approval and industrialization of this innovation. A further option for the electrification of the fleet and towards sustainable mobility is now available. 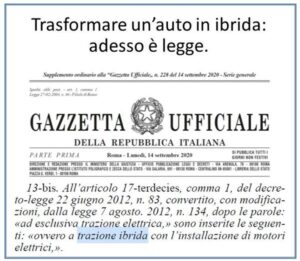 A few years ago, a law that we can define as &quot;historical&quot; sanctioned the possibility of converting a traditional car, with an internal combustion engine, into an electric vehicle. It was an extremely important innovation, even if the concrete response in terms of the number of converted vehicles has so far been lower than initial expectations: certainly also due to the persisting difficulties that hinder the spread of electric cars, such as limited range, long recharging time and the lack of charging facilities. And, last but not least, costs. Today the range of options is being enriched, with the possibility of converting a car into a hybrid vehicle. It was in fact published in the Italian Official Gazette (no. 228 of 14/9/2020) a rule that extends the conversion from the only case of pure electrification to the case of hybridization. In this case, the thermal engine would not be replaced with the electric motor, that would be added to the powertrain, to work together with the original engine.

It is a solution that will allow to obtain part of the advantages of electric traction without suffering from the problems related to limited range and battery recharging. However, the conversion also gives further benefits, compared to the purchase of a new hybrid vehicle. In terms of economic sustainability, since a conversion kit costs much less than a new vehicle. In terms of environmental sustainability, in a context of life cycle analysis (LCA): car reconversion avoids to “waste” the energy spent to build the vehicle to be replaced with the new one and which would be scrapped prematurely.

This website uses cookies to improve your experience while you navigate through the website. Out of these, the cookies that are categorized as necessary are stored on your browser as they are essential for the working of basic functionalities of the website. We also use third-party cookies that help us analyze and understand how you use this website. These cookies will be stored in your browser only with your consent. You also have the option to opt-out of these cookies. But opting out of some of these cookies may affect your browsing experience.
Necessary Always Enabled

Any cookies that may not be particularly necessary for the website to function and is used specifically to collect user personal data via analytics, ads, other embedded contents are termed as non-necessary cookies. It is mandatory to procure user consent prior to running these cookies on your website.