Envinronmental sustainability has been inflected several years ago through the principles of the three Rs, that is: Reduce, Recycle and Reuse. These principles can be applied in all sectors of industrial and, in general, of human beings development. A recent study commissioned by the United Nations and published by the Intergovernmental Panel on Climate Change has revealed that humanity has only 12 years to safeguard the environment and contain global warming to a maximum of 1.5 Celsius degrees. Therefore, we have the obligation to adopt immediate solutions to protect the environment and ensure the survival of all species on the planet. 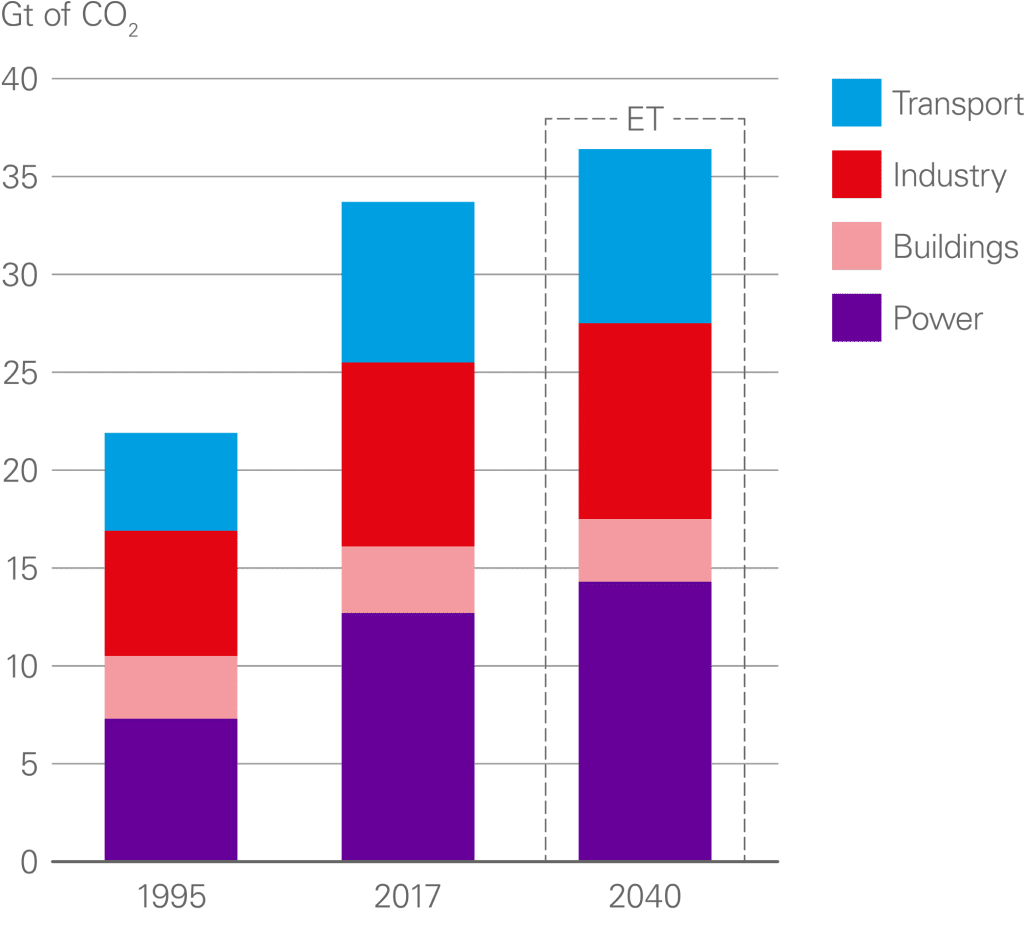 Transport is one of the most impactful sectors in terms of CO2 emissions. In fact, it is responsible for 29% of emissions in Europe. CO2 emissions have a global impact, but vehicles are also responsible for the emission of pollutants, such as CO, NOx and particulate matter, which have a local impact and directly affect human health. While new and more stringents limits are placed on CO2 emission and pollutants for new vehicles, which are achievable also thanks to hybrid ones, ever faster steps are being taken toward the transition to purely electric mobility.

The current electric vehicles technology, as well as presumably that of the immediate future, comes up with problems of non-trivial resolution. The limited range of vehicles and the lack of a widespread recharging infrastructed as well as the relative slowness of the recharge itself, set strict limits on the use of an electric vehicle. In addition, in order for the vehicle to be a sustainable solution, the electricity used for recharging must be generated mainly from renewable or low-carbon emissions energy sources. Lastly, electric vehicles still have prohibitive costs and the useful life of batteries is a hot topic. For these reasons, a rapid transition to purely electric mobility is not behind the corner and we do not have much time before causing irreversible damages to the climate.

One of the best solutions in terms of sustainability is to convert existing vehicles into environmentally friendly ones. A study presented by researchers from the University of Salerno (Francesco Antonio Tiano, Gianfranco Rizzo, Silvio Landolfi and Giovanni De Feo) at E-CoSM 2018 (5th IFAC Conferenec on Engine and Powertrain Control, Simulation and Modeling) held in Changchun, in the north-east of China, from 19 to 22 September 2018, showed that the conversion of a conventional vehicle into a plug-in solar-hybrid car is one of the most sustainable options in the short term. This research was carried out by performing a complete Life Cycle Assessment (LCA) of different types of vehicles, from conventional to electrical, hybrid and plug-in hybrids. The results were obtained by the use of the GREET software developed by the Argonne National Laboratory of the US Department of Energy. This software allows to take into account not only the energy used and the pollutants emitted by a vehicle during the phase of actual operation, but also of the fuel cycle (Well-to-Pump) and of the construction and disposal cycle of the vehicle in question.

This study has been further expanded to include the conversion of a traditional vehicle in a purely electric one as well as considering different energy mixes for the production of electricity used in the sector and determining other pollutants emitted (in particular, NOx and particulate matter). The results of this new study are being published in one of the most important journals in the automotive sector.

The scenario analyzed was that of the option of keeping your conventional vehicle, gasoline or diesel, or scrapping it to buy a new hybrid, plug-in hybrid or electric vehicle, or instead to convert it into a plug-in solar-hybrid or an electric one.

The conversion into a plug-in solar-hybrid of a conventional vehicle is possible with the system developed by researchers from Salerno, by installing electric motors in the rear wheels, and additional battery e solar panels. In a typical urban use, the system allows to reduce fuel consumption and emissions up to 20%, also increasing performance. This system is part of the LIFE-SAVE project (Solar Aided Solar Electrification), funded by the European LIFE program, with the participation of eProInn, a spin-off company from the University of Salerno, and of the industrial partners Landi, Mecaprom and Solbian.

Conversion of a conventional vehicle into an electric one is possible with specific after-market kits that include the removal of the internal combustion engine and of the fuel tank, and the installation of an electric motor directly on the wheel drive and a battery suitable for vehicle traction.

The trasformation of a conventional vehicle into an ecological plug-in solar-hybrid or in an electric car avoids the early scrapping and consequently avoids wasting the energy and pollutant emissions incorporated in the vehicle during it assembly, which have 20% of impact on average. In fact, new electric, hybrid or plug-in hybrid vehicles have a high impact in terms of energy and emission during the construction phase compared to those of a conversion kit. 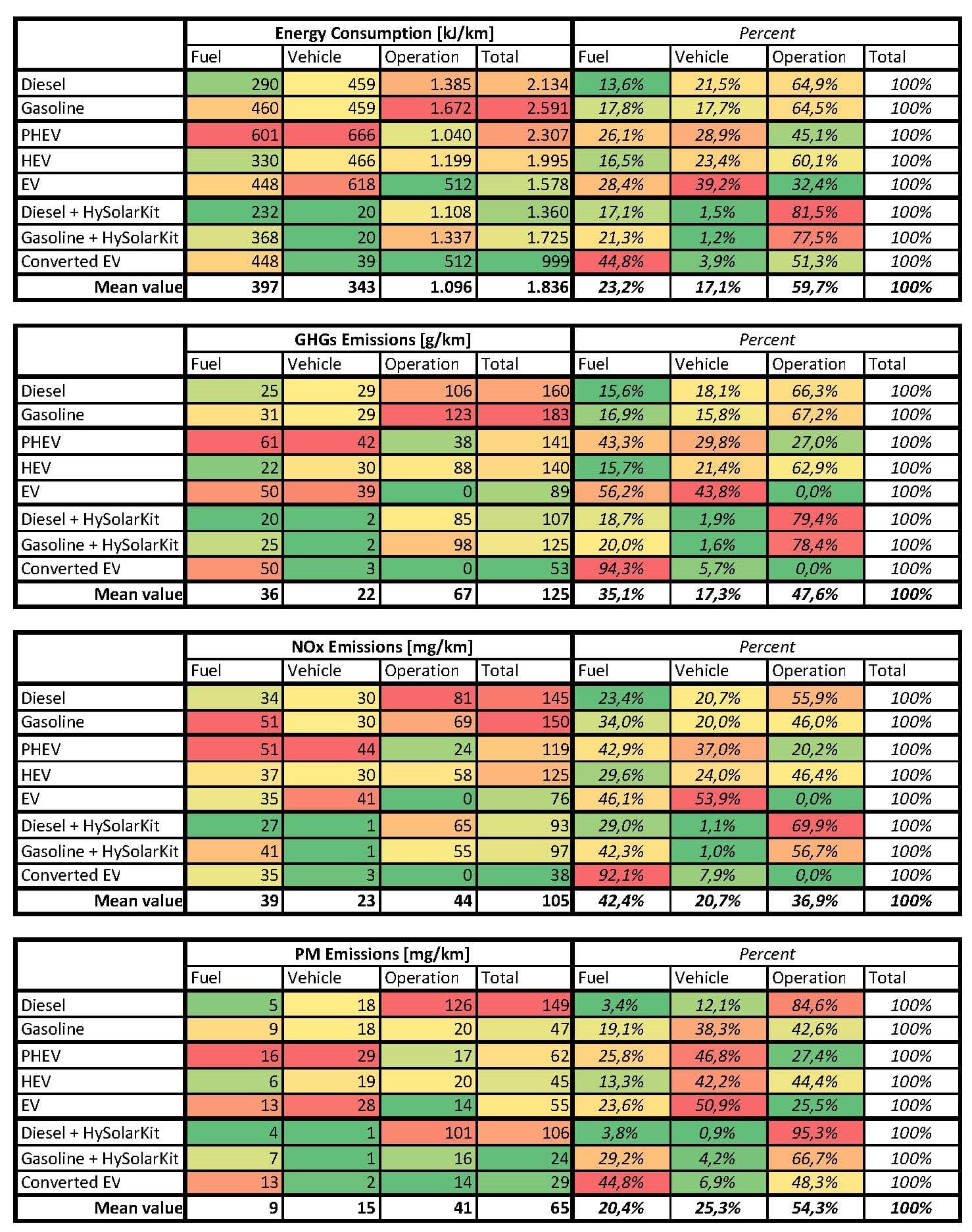 The use of electric or plug-in hybrid vehicles, as mentioned, requires that the electricity needed to recharge the batteries is produced from renewable or low emission energy sources. Conversely, by continuing to produce energy with current mixes, we are only moving the sources of emissions from the cities to the power plants. The type of energy mix of the nation influences the total energy consumed and the emissions of pollutants also during the vehicle construction cycle, albeit to a lesser extent. The study has shown that the lowest CO2 and other pollutants emissions are achieved only if the energy mixes are composed solely of renewable sources and nuclear power. An energy mix composed solely of biomass has low CO2 emissions due to the “virtuous CO2 cycle” associated with biomass, although this assumption has been recently challenged. Among the real mixes analyzed, it is the Italian one with the lowest emissions thanks to the high penetration of renewable sources of their mix (38.4%) and a low production of energy from coal (15.9%). 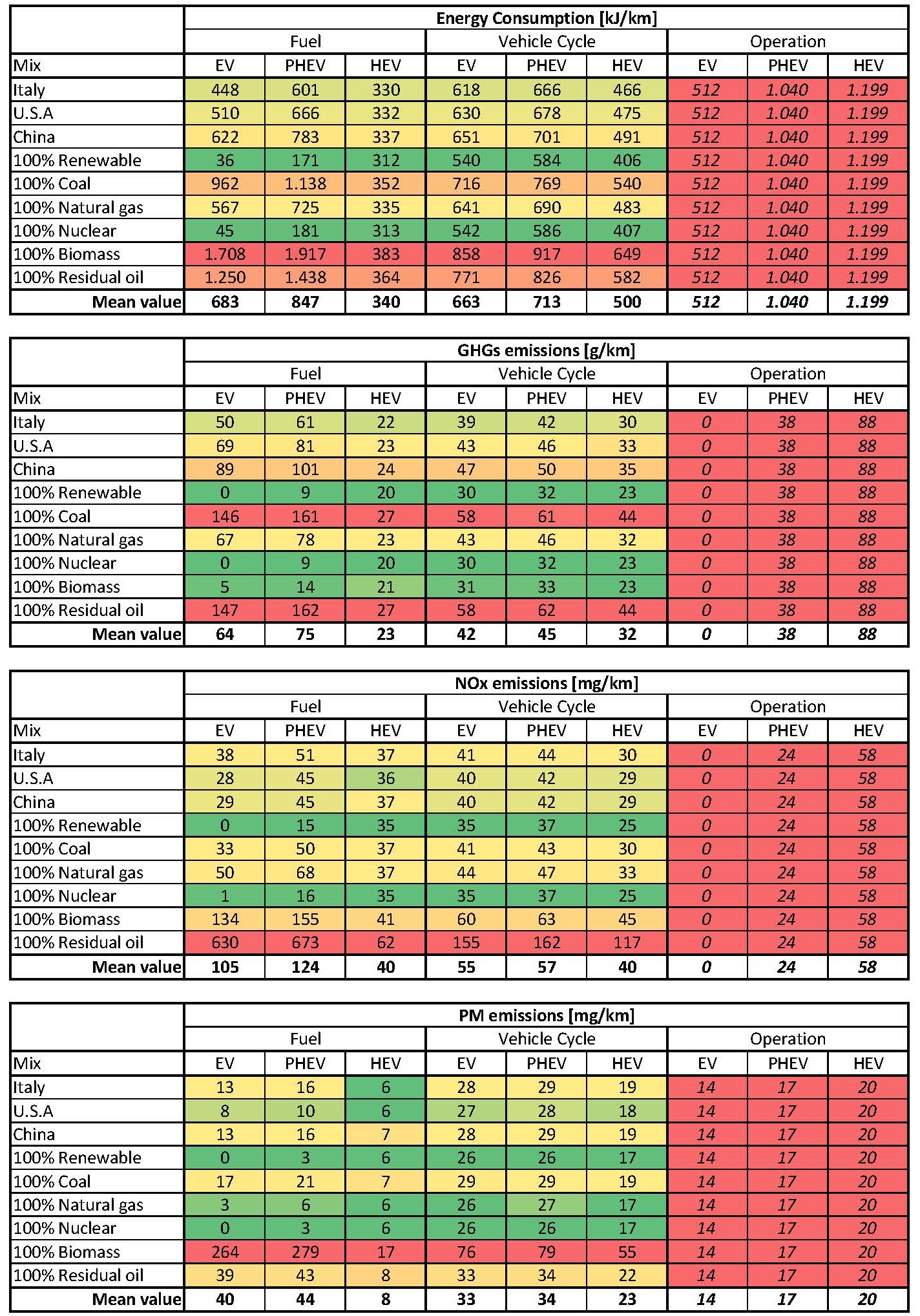 In conclusion, the conversion of a conventional vehicle into a plug-in solar-hybrid or into an electric car greatly reduces the impact on energy consumption and CO2 and other pollutants emissions thanks to the avoidance of scrapping and therefore the construction of new vehicles, whose phase weighs on average for 20% on the overall energy and emissive balance. The conversion of the vehicle is in line with the three Rs that represent the pillars of sustainability: the reduction of consumption and emissions, the recycling of the materials used and, precisely, the reuse.